Making a campfire from fresh frozen lapland birch at winter. 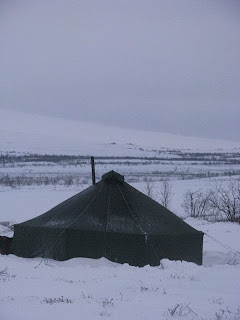 Heres a few pictures, that i took a good while ago while we were on ski trip, in lapland,  for a week, to participate reindeer round up in actual work, that only by watching etc. We got to see butchering, pelt removing etc, and we stayed in foxholes dug in snow, plus a surplus army tent, with occasional fire in the stove if we managed to gather enough wood. You know, the wood...the trees there are like a Bonsai trees, tiny but still old, birch growing almost along the ground, instead of rising to the sky above. Its waste of time, to wish and search for huge 8 inch birch in most areas. Anyways, at one day (yes, its daytime, but at december, theres light only for 3-4 hours, if not even that, and then its again pitch black everywhere ) we wanted to make a fire outside, to fry sausage and just to have a stable light  instead of various headlamps going here and there in the darkness. 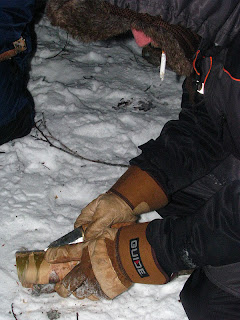 This aint nothing special, no, not at ll, but its usefull in my opinion to have some training to ge the fire going. Birch, that we cut and gathered, by walking in waist  deep, or deeper snow, with and without snowshoes (well, someone had the brains to haul those heavy snowshoes with him...). You dont cut any twigs and branches off from them, you just drag em in the camp as they are.  Axegeek  is back ? Nope,leave it home, its just useless in tundralike areas. Instead, use a leuku, a  smaller saw is good too, or as i did, a billhook. The material is barely 3 inches in diameter, so it cuts with a slash or two, with a billhook or a saw.

After you have brought a few full birches, you start to cut off the branches. This is where the detail work starts.  While you cut the braches, start to put the similar sized pieces with same diameter in their own piles. The thicker ones to their own pile, and the small ones to the pile of tiny stuff. Some 3-4 piles with different size stuff in their own piles, will do. 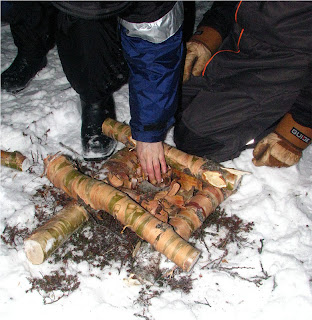 Then you remove and gather, All the possible bark of birch trunk, in one hopefully large pile,or stuff it in sack, in your overalls etc, to keep it safe from blowing wind and to dry it a bit from possible ice cover around the material.

Ok, so now you have your stash of removed bark and a good few piles of actual wood. If theres not much of snow,  then try to dig in it, all the way to the ground but remember to do it in a wide area, not just where the fire will be, as when the fire gets going, it radiates heat that melts the snow....that eventually will drop....in to your fire. If there is a deep snow cover and you cant use anything to shovel it, then try to stomp the ice in to tight pack, and then arrange some of the thick wood pieces, as a mattress, in the place of future fire. It helps a lot at start, atleast. 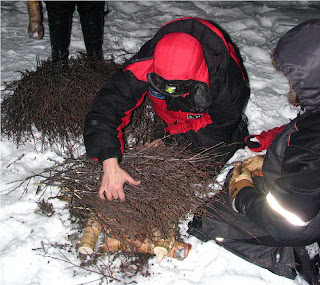 So, now you lick your finger a bit, and stick it up in the air to notice where the wind comes from if theres not much of it. If there is, well, you know that without freesing any spit covered fingertip:). Put two, large wood pieces, so that theres a something like 20-30 cm gap between em, so that the wind comes and blows between them. This helps the air to pass, in fire, without never ending man performed air blowing in to ambers.

Then you carefully place all your bark, between the two branch pieces mentioned above. You better kneel while doing this, back against the wind, as the bark might fly away in to the darkness. After that, place the smallest, 2 to 4mm twiglike stuff, loosely on top of the bark. Then you put the stuff thats a step thicker, on top And around the pile of tiny stuff. 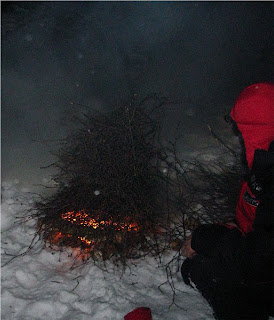 Then you put two of the largest sized wood, similar to the first laid two ones, so that they are on top of the first ones,but with smaller gap between em. This, gives the "# " shape to to firewood when you look it from top off it. Then just add more wood, so that theres always a layer of thicker material, on top of smaller. This way, the bark, will set the light on the tiny twig sticks, and as it sets in fire, the flames and heat, will allow the next upper layer of thicker material to dry a Bit, before catching in to flames, and then to dry and light the next,  thicker bunch. Simple and effective, as long as you get enough bark and that thinnest material on bottom of it. Now, some of you might be yealling all over about "processing" of wood, but as this is an old emergency way to do it, and performed in snow and cold, theres not always even the tools, nor time, to star to play with axes and batoning etc, if youre gone all wet, or something, lost your big camp knife and such and you have to do it with few matches and a small basic puukko. Plus, the snow.....its pretty hard and even annoying to try to baton a piece of 2" birch, against a meter deep snow, as the wood will only sink in to snow.....yes, you Can definetely use some of the wood to help, bu keeping it under the batoned one, but, this is how its usually done. The american, german, swiss, etc, ways might be different indeed, but this is a genuine ,old, lapland peoples way familiar from older hiking & survival books and courses. 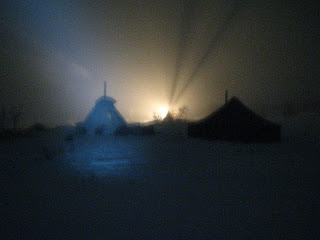 I am proud to celebrate that and i like the fact that theres no multinational European Union flag in our flagpole, and i hope we will never go to that.

Ill be heading to cabin with few friends, to heat the sauna and enjoy some deer roast with shot of Mannerheim´s special drink.

I owe to everyone who has fought, for our indepency, especially to ones in the actual field service and i´d rather see veterans and real people in independence day parties, thatn television celebrities and business men ready to sell our land for any profit.

Eventhough the indepence starts, from 1917, and we fought to get and keep it, on later times too, in bigger scale, i personally connect my thought, to the times of WWII and fighting against Russian invaders. Political games and business,thats not my bag. I dont like Finland, in which, our leaders tend to say " our opinion is a stong maybe". Its a shame. I would take a bullet, defending my working class, common man, the average joe, women and children. To keep our land somewhat beautiful as its now, to see forests remain, and to prevent our nature. But, for greedy leaders, jacket turning, double talkin´ elite, no sir. I am maybe a nationalist,but, not a racist, but still, i´d rather see our funds and time, to be guided to our own people, homeless and the poor, than allow foreign "refugees" come in, when theres enough to do, to get our own people to have better life. Theres absolutely nothing wrong to be Finnish and proud of our own national culture. I hope the schools would teach our kids, that as well, instead of passing on the lectures of how to sell our land and imitate foreign MTV-lifestyle crap,as it seems to go nowadays. Its good to tolerate different people, but hey, keep a limit to that as well. We dont need any drug dealers, child molesters of any nationality nor race,may it be Finnish or any other. Take the kids to see and Hear veterans of our wars, while they are alive, tell em to take the hat off while inside the house,to wonder in the woods..theres million ways to show em what we are and where we came from.

Anyways, tomorrow, is a meaningfull day to me and i wanted to tell that to you as well.


IF you find this post offensive and take me as a right-wing extremist or any neonazi sympathizer, youre wrong. I just happen to love my country, as you might love yours, and we both have the righ to feel so.
Lähettänyt Perkunas klo 20:49 7 kommenttia: 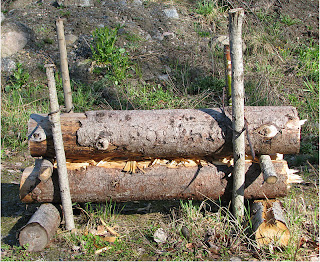 Someone asked, about a fire he had seem a few times on Finnish films. Its this, the "rakovalkea", that translates in to "gap-fire" but i´ve seen similar named as "longfire´s".   Here, its long fire, if it has only TWO ( 2) logs, the three log fires are different story. Very traditional fire for staying over night in the woods,especially  under cover of tree´s and in lean-to´s. Few different ways to do it, but this one, is one thats even a secure, safe one, as it has the supporting poles, made from fresh wood, to prevent the logs from dropping to ground just like that. Usually if you sleep by fire, you put a smaller branch of thin log between you and fire, to stop possible dropping burning log from rolling against you, and preventing you to roll too close the fire, in sleep. You should sleep sideways, so the fire will warm your feet and head, but its ok too, to sleep feet towards the fire.

I think that youll get a good idea of longfire´s construction from that picture. Just remember to carve a groove in to the lower log,and fill it up with the whittlings, small sticks, maybe tarwood and birch bark, juniper bark will also work. Plus, the sticks, between the logs, that make the gap, they should be fresh, and moist wood so they wont burn as fast as the logs, and if possible, whittle the sticks, in shape of wedges, tapering ones, so you can push and pull the stick wedges, to adjust the gap,to keep it small, so the fire will burn slow, but hot, for hours. A properly built, longfire with 8inch diameter logs, can burn for some 8 hours or so. And traditionally,  the measures are :

-1 inch in diameter is an hour, in burn time, but this depends alot, from the type of log,weather etc. I think you should not build longfires fromwood thats thinner that 4 inches but you can offcourse, do small miniatyre longfires, from any sticks, just to learn it etc. Commonly, however, the 8 inch log was popular size.

-1 meter in length  per person sleeping around it. In some cases, and for obvious reasons, it wasnt rare habit to measure the log, so that there was a length of axe, per person,and in finland, back in the days, the most common axe measure, was from 50 to 65cm, in most of cases, it was 50 to 55cm. The "meter" length came later when people started to carry devices to measure :), before that the "jack" measured everything with comparing to tools and arm/finger etc measures. Even today, it works, the fever for accurate measuring, in the bush, is weird. Theres about nithing that should me measured in tiny tolerances like millimeter on centimeter. And a meter, its all the same, if its 99cm meter or 102 meter  there :)..."About" will do just fine.


There are also older methods, without supporting poles in the ground, but  i´ll show you one, during winter when i´ll be making one. Meanwhile, you can try to build your own versions of it. As long as you can adjust the gap between TWO logs , its close to longfire that we use here,and as i said, theres many many ways to do it.