I got a few things from Mr.Postman-girl today and i opened the box while i was having a cup of coffee. Inside was a Roselli leuku with bit modified handle and a non-original sheath. Also included was a Mora #1 with nice dark handle,laminated blade and leather sheath. Because there was also a wrap of paracord, i instantly had to try out an idea that i got as there was  two blades,an extra small sheath and something to tie those together intantly. So, the coffee had to turn a bit cold and i made this: 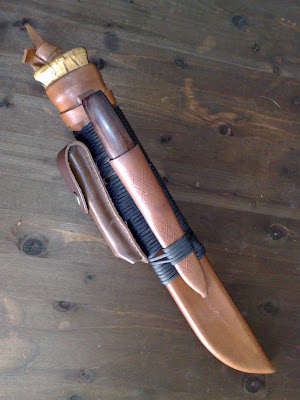 What do u think ? 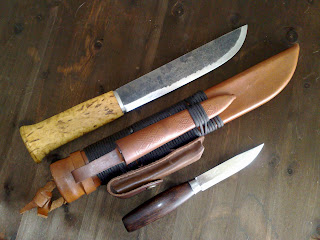 I think its pretty nice actually, two blades for both, coarse and finer tasks and an accessory pouch for sharpening stone and firesteel. And in case i Really have to,u can untie the paracord and then i have 8 meters of cord ann yet the both knives are stand alone-type with their own sheaths that can be worn on belt, or the other can be give to someone else.
Lähettänyt Perkunas klo 12:39 9 kommenttia:

Nice day out in a fresh cool air & sunshine.

Today morning i went to shovel away a pile of snow that had hidden an ATV. It was already starting to shine and the temperature started to heat up from -30c. I had to hook up a start booster as the batteries were almost frozen and if not,still they were on low output level. Then i stuck a heater used in car floors,aginst the engine block. After an hour it started to run like it was being held in tropic´s :). 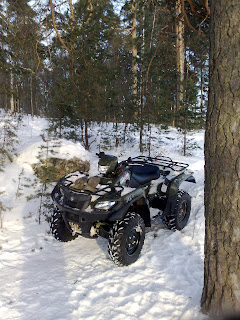 Then my friend picked me up and we loaded the ATV in the trailer and headed to our destination in certain beachside. Unloaded the ATV and picked up Swedish army tent with its gear like stove and such. then back to the ATV´s location and i drove to this island across the frosen lake,there was even a small camera crew in the trailer with my friend and they were filming our tasks. More my buddies things, i like o stay low :). 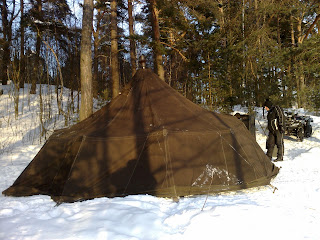 So we put up the swedish army tent,it was the first time for me,but what the heck,the tent looked to be cleverly designed, when compared to our army´s smaller "ranger" group tent. No external snares,no wires,no ropes to stumble against and fall and bash the tent. Even the stove was looking better but the actual perfrmance i will see tomorrow. 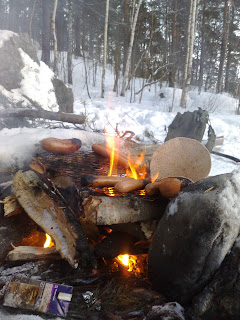 So as the tent was erected we put up a quick fire, and fried veggie and normal sausages,rolledem in tortilla breads with cheese and it was good after working in cold, the only thing missing was a pot of coffee made on fire and maybe even a beer,atleast i could have one easily:). 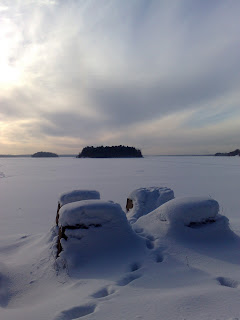 It was nice to work in the bush, drive around with ATV, especially due to the nice sunny weather it was all day long, i didnt feel cold a second although it was some -30 to -22 all the time. 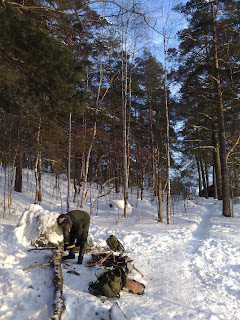 Thanks for the day, Esko.
Lähettänyt Perkunas klo 21:19 3 kommenttia:

Heres just a quick snapshot of one thing i ´ve been fighting with. Its supposed to end up as a tiny backpack,mainly to carry an axe but it will take in a canteen, small amount of food and maybe a tarp too.
We´ll see how it goes. 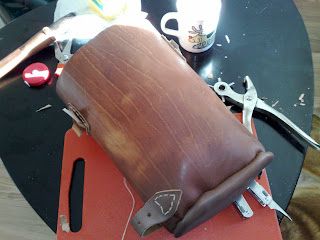 It has pieces of broken horse saddles,bags and similar recycled stuff and i am not measuring or drawing any patterns, so it will be naturally crude and raw looking.
Lähettänyt Perkunas klo 17:15 3 kommenttia:


so as i am participating as assisting teacher at several knife making courses, i "had" to make one puukko to myself, and at the same time teach others, i didnt have opprtunity to forge my own blade as the students were on the anvils but i had this pretty slick, sturdy puukko blade that Mr. Kotavuopio gave me. Its made out of  52100 steel which is used on ball bearing races. Its specailly heat treated so that the edge is pretty damn hard but the spine aint. Blade has some 10 centimeters in it and its pretty heavy as the spine itself starts at thickness off 5 millimeters. The tail is more like on rugged leuku´s. 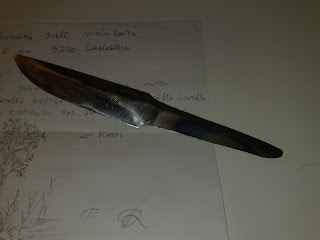 The next thing was adding a bit of length to the tail so i welded a stainless steel screw to it. I split the end and slipped it over the tang and after a tiny tig welding it was there. I kept the tang cool with wet cloth so the heat treatments wouldnt ruin. So, the blade was ready and i cut a curly birch block in to about 15 centimeter long pieces in 30 cm radius and with a band saw, i made a bunch of handleblanks for others too. I selected minne and drilled the hole for the tang all the way thru the piece of handle blank. Then i started to file and fit the blade to the handle. I dont know if you already know this but a jigsaw blades and other tiny saw blades are very good tools for the fitting, id say they beat the heck out of files any day.


Then i had the tang starting to perforate the handle pretty well so it was time to look for something, some material to be used in handles ends, we call´em "hela´s". I didnt figure any good source althought i wanted to use antler or cow horn at first but i started to them off .308 rifles brass cartridges since i have bunch of those around. 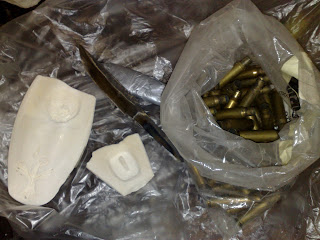 I carved some coarse molds into cuttlefish mold and then it was time to melt the used brass cartridges to be casted into molds. 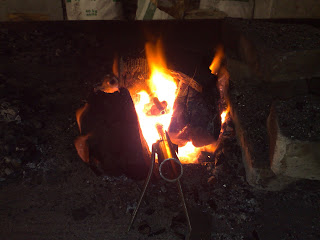 I poured a hint of Borax into melting cup of brass and then i cast the stuff into mold and yanked the front part off and it copied pretty well into molds shape,still there was plenty of filing to be done...:) 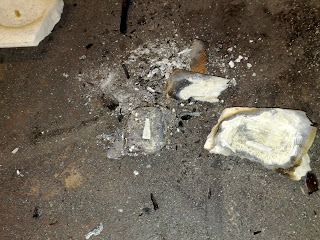 So it was time to grind,sand and file the brass parts a little,or even more, i dont deny....but the frontal part startted to take its place pretty easily and fitted snugly over blades tang. 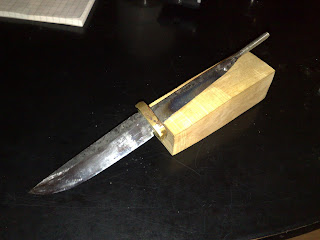 Then some rough shaping on the wooden handle that was still a block shaped... 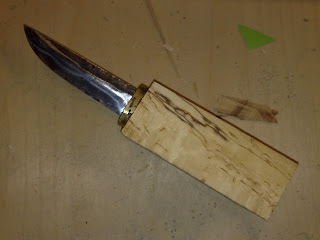 And then more and more, trying to get a nice and useful shape into handle so that it would still fit nicely into brass part as well as into my hand. 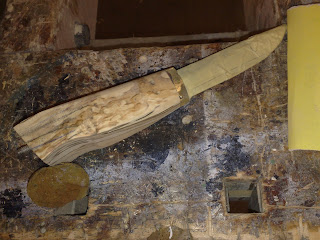 The brass piece to be fitted on the tangs end was very heavy and big so i had to shape it pretty much. 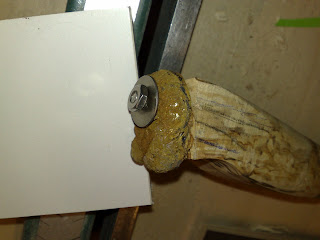 It was stiil pretty easy to make the parts fit nicely as the knife could be put in to one piece and then into pieces,thanks to the threaded tang´s extension. It will be gone still,when the knife is all the way ready and i can pound the screw just like a riveted end so it will disappear a the end. 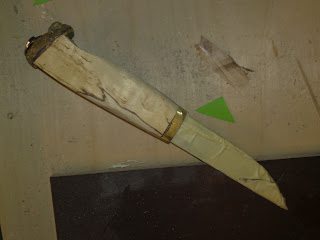 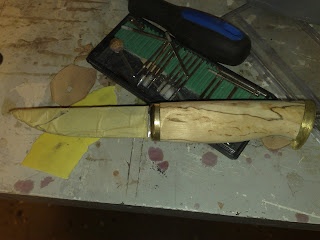 Slowly its staring to look as puukko of some type. It was slow since i wasnt doing it just by myself, as i had to teach and direct, help others and at the side my own puukko was like a example. 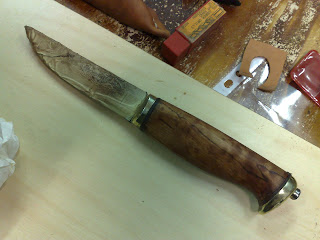 In any case, its in this point now. I dyed the handle with water thinned leather colour,and let it suck a lot of oil and i secured the fit between handle and blade with mixture of sawdust and epoxy glue. It was nice to really cast the brass parts, instead of using ones bought from any shop as iprefer doing myself more than just putting up bought pieces. The stainless nut part in the end is, as i mentioned,going to disappear as the handle finds it last position and i get the leather spacers filed to good tight fit. Then its just waiting for the sheath to be made and its then good for my use. 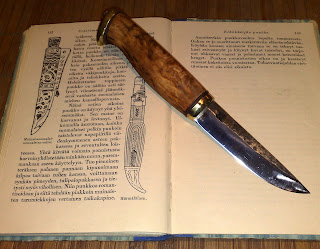 Hope you liked this and  found it maybe even useful on your own projects.
Lähettänyt Perkunas klo 18:08 8 kommenttia: 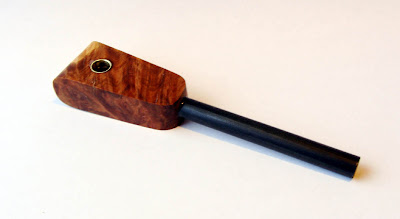 Kotavuopio is offering now a variety of firesteels in many materials and in very fine finishings. At the beginning he´s selling in quarter inch diameter and the firesteels giving a good spark, unlike cheap ones. Ask for material choises and designs, im sure he can put up a custom made firesteel in just about any shape or material. Overseas shipping and Paypal are ok.
Lähettänyt Perkunas klo 18:28 1 kommentti: