As the fall arrives without a doubt, and it comes with grouse hunting season and other activities , i started to make a new shelter. Its sadly not made like , nor to be any "real" saame/saami kota nor lavvu, its just a simple hideout in that vein.I am still thinking of converting this quite a bit to make it more "real", though.. But, i think, that as its made out of birch, and it stands surrounded by relatively small birch ( compared to other birch areas in this part of Finland ), and that i made it all the way with just one tool, my leuku, made by my good buddy TK, from lapland, it reflects a bit of that norhern style already ?. It was hellova stuff to chop off all the birch trunks with that leuku as its the lightest and shortest that i have. 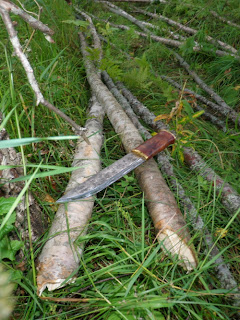 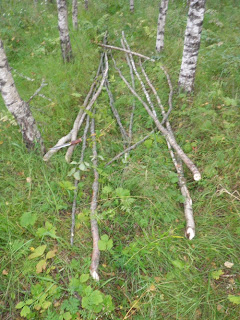 I do need more of birch still, to make reinforcing pieces, bedding items, some pieces that i can tie in the upper part of the shelter, to make a horizontal, triangular shaped part  that i can use to hang my pots, wet clothing and to cure meat with smoke maybe. 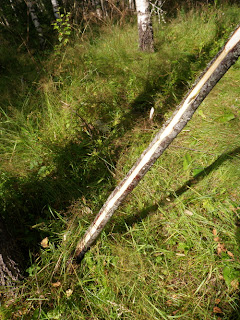 The ends of birch poles, i sharpened in a crude way, and then threw the end in to campfire, to burn the bare birch ends, so they get a good coal on em, as coal really stands against time. So the ends wont rot so easily at all, when driven in to the ground, as they have burnt well. 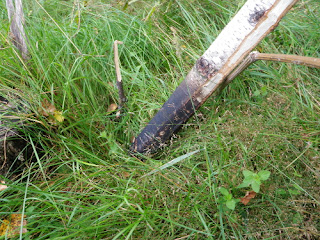 You know, in many cases, archeologists find remains of old log houses etc, that were burn, and not so much remains of un-burnt structures...I was going to strip away all the bark from the poles, so the wood would dry pretty quick , but as i did have limited time to make this stuff today, i just used leuku to peel off an inch or so, wide strip of bark, of every pole, for the entire length of em. This way, the wood will dry too, but slower, but its important, as wet, fully covered by bark, birch would start to rot inside the bark...not good, i say. Its just a small detail to make the poles live longer and harder. The shelter is just tad over 4 meters in diameter, so its very ok size for three grown men to nest inside, sleep and hang out, and its bit over 4.5 meters tall to the joint of poles. I used  a 2.1 meter rope, with two nails tied on the ends of rope, to draw the ring, in to the ground, and to make sure that its circular shaped. I just stuffed the other ends nail in to the ground, pulled the rope tight and used the other tied nail as a scraper or a pen. then i whittled some dozen sticks, and pushed em in to the ground so te circular shape was more visible. 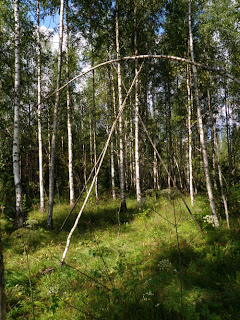 Then i  tied the first three poles that were the thickest ones, together , and lifted the tripod that was formed up, and adjusted them, in to the drawn circle, so that the distance between them was somewhat equal. Then i kept adding three poles at a time, between these first three, so they are pretty well tied together now, and as i have time, ill tie em all together with a thin welded chain, that has long loose, hanging end too, to be used as a pot hanger. 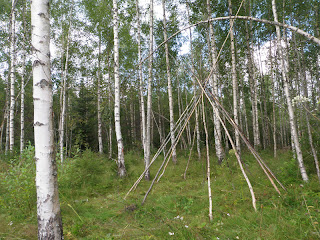 But, this is how it is now, and ill write more, when i get it done more and more. I sure would like to spand overnighters and time in this, especially during winter.....winter, my favourite part of year.

Great! Looking forward to more of this.